Down the Rabbit Hole with Alice

A few years ago, Jon Lindseth–Lewis Carroll scholar, collector, and curator–commissioned a black-and-white map of the world showing locations of the 174 languages and dialects into which Alice’s Adventures in Wonderland has been translated. He planned to use it as the endpapers for a 3-volume work entitled Alice in a World of Wonderlands: The Translations of Lewis Carroll’s Masterpiece, of which he was General Editor. The original map (ink and acrylic wash on canvas) is 53″ wide; in endpaper form, it is 15.50″ wide. 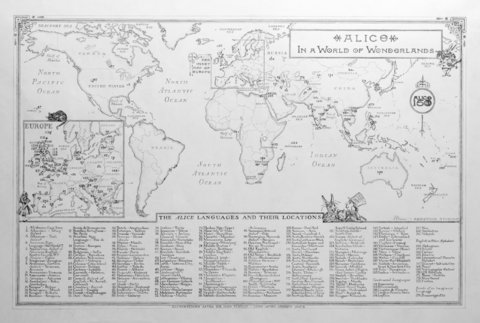 The map provided me not only the opportunity to use Victorian typefaces & border designs, but also the privilege of paying homage  to Sir John Tenniel’s iconic illustrations: 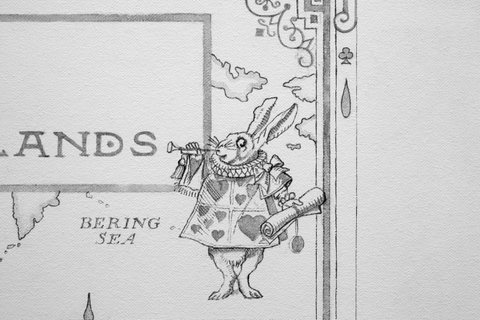 Not surprisingly, Western Europe bristles with toponyms, so I designed an inset map to enlarge the region. Here, Alice gives it the once-over: 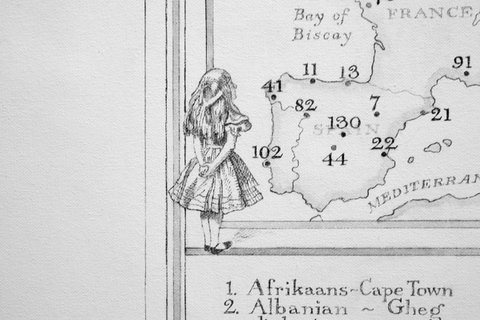 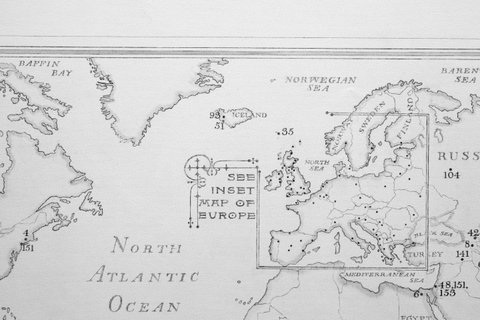 The book’s 2015 publication date intentionally coincides with Alice150, a world-wide celebration of  the 150th anniversary of Carroll’s great work. Besides the book, Lindseth curated an exhibit at New York City’s Grolier Club featuring the Alice translations, the original of this map, and three other maps of mine (these full color) commissioned especially for the show. Last night I attended the opening; I was proud to be part of the project, and eager to see the translated works. If you’ve never been to the Grolier Club, make a trip: it’s a beautiful building with a spectacular exhibit space (free and open to the public!). For bibliophiles, Lewis Carroll aficionados, and maybe even map-lovers, the show, which runs until November 21st, is a must-see. Exhibit info here.