IF FOR SOME REASON YOU FIND YOURSELF IN the West Wing - the real West Wing, not the television show - you might be particularly struck by the office that Dick Cheney calls home. The wall directly behind the Vice President's broad, imposing desk is dominated by an even more imposing map. Stretching a good five and half feet across and hand-painted on canvas, it's the kind of venerable, detail-rich specimen you might suspect to be on loan from the Smithsonian or Library of Congress. But the map, which documents the Civil War experiences of a Captain Samuel Fletcher Cheney, is not in fact an antique, even though it has "heirloom" - and lines from Lincoln's Gettysburg Address - written all over it. Rather, it's a startlingly recent creation commemorating Cheney's great-grandfather and his regiment, the 21st Ohio, and is inset with a battlefield map of Chickamauga. It was commissioned by the Vice President's daughters, Liz and Mary Cheney, and executed with painstaking precision by painters Julie Ruff and Connie Brown, who own Redstone Studios.

These two self-taught artists began producing custom maps together six years ago, after having collaborated on a number of other decorative projects. Their creations tend to be presented as blockbuster gifts, and the Cheney map certainly qualifies. "I was stunned when I saw it," Liz Cheney says of the sumptuous canvas when it was unveiled at her father's sixtieth birthday shortly after he took office in 2001. "You could tell that my dad was just very moved by it, and it's now the centerpiece of his whole office."

ONLY 25 MAPS ARE CREATED PER YEAR, EACH ONE embellished with old-school touches - cartouches, compass roses, ornate borders, charts and diagrams, schooners scudding across blue oceans, the occasional sea monster. Obviously these are no mere AAA maps, but neither are they purely ornamental. "We want them to please the eye," Ruff explains, "but also to do the work of showing geography."

A typical Redstone map - although no two are actually alike - combines uncompromising cartography with painterly panache and even a touch of whimsy. Take, for instance, the one created by Brown to capture a trip taken around the world at the equator. The client, Angus Carroll, is an enthusiastic traveler and map collector whose first choice for the commission would most likely have been Abraham Ortelius, the Flemish cartographer who created the very first atlas of the world - the landmark Theatrum orbis terrarium - in 1570. (Oretelius and Gerardus Mercator are the guiding lights at Redstone Studios, "the heavy hitters," according to Brown) The finished piece is gorgeous, complete with latitude and longitude, that accurately depicts one man's true-life equatorial adventures. It's also a playful homage to Ortelius, full of Theatrum-worthy flourishes in vintage reds and greens, dotted here and there with the improbably beasts of the Torrid Zones, and topped off with the suitably mischievous title, It's a Jungle Out There.

"Everyone stops to look at it," Carroll says of the map, which now hangs like a tapestry in his front hallway. "They just cannot imagine that it was all hand-done. My wife and I stare at it, too." 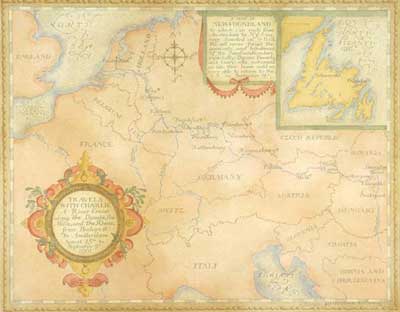 MAP QUEST A memorable European river trip, with a return-trip detour to Newfoundland due to the diverting of planes on September 11, 2001, shows the intersectiong of cartography and history in its umber color palette.

ALTHOUGH RUFF AND BROWN have a slight scholarly mein about them and describe themselves as "shut-ins," they're personable and funny and, like many of their clients, serious, sophisticated travelers. (Brown identifies the map she painted of her own Pyrenees trek in 1996 as the starting point of the pair's focus on custom mapmaking.) Their work reflects an unfailing rapport with the armchair historians, ardent genealogists, sailing buffs, loving spouses and proud parents who commission these cartographic masterpieces as a way to tell their own personal histories. "Geography is certainly a form of biography," Brown says, "or it can become so with the maps that we do."

When clients approach the pair with an idea, they join in a uniquely collaborative process. They provide the narrative and pinpoint the locales, whereas Ruff and Brown provide the palette, style, and cartographic exactitude.

Their "diaspora maps," in which dotted lines stretching from Eastern Europe to the United States trace routes of survival and triumph, are particularly elegant and understated. There have also been maps of honeymoons, maps plotting the course taken by couples to adopt babies in far-off lands, even one presented by a grateful patient to her oncologist. Ruff and Brown have documented marathons, rafting adventures, and Martha's Vineyard, Tuscany, and the Grand Canyon. Although Redstone maps have an identifying manner, they tend to be stylistically freewheeling: There are maps done in the Adirondack style, with fanciful birch-log borders and pinecone-wreathed cartouches; others tap the decorative traditions of India, Africa, or China, for instance. Ultimately, every one is a canny expression of a client's particular exploits. "There are all these really fabulous stories," Ruff says, "and I think that's what keeps things lively for us."

Updating the watercolor techniques used in the days of Ortelius, Ruff and Brown use acrylics on canvas for greater pliability and permanence. A translucent wash of brown gives Redstone maps their mellow patina and suggests vintage watermarks. Surprisingly, Redstone is the only studio doing this kind of work today, and its clients tend to be entirely captivated by the results. Brown mentions one in particular who likes to get lost in his Redstone map every single day. "He said to me, 'You know what I really love about this map? It's all about me!' "